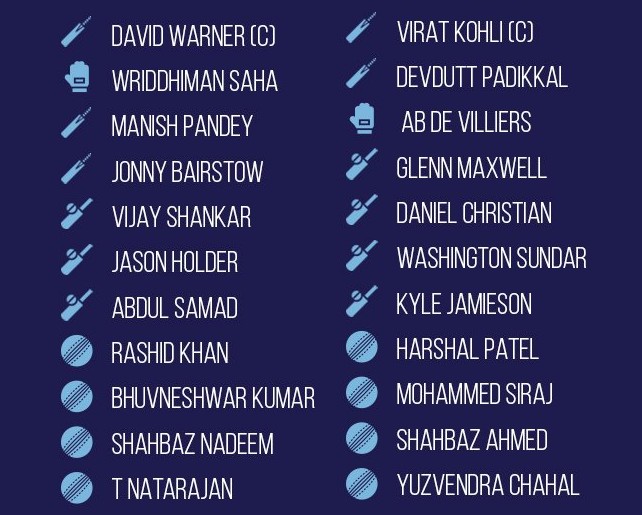 After being sent in by Sunrisers skipper, Royal Challengers Bangalore lost opener Devdutt Padikkal caught at midwicket by Shahbaz Nadeem off Bhuvneshwar Kumar for 11.

Shahbaz Ahmed promoted at No 3 scored a 10 ball-14 before falling to a brilliant catch by Rashid Khan off Nadeem.

Virat Kohli along with Glenn Maxwell stitched together a valuable 44 run stand for the third wicket before the former top edged a Jason Holder delivery to Vijay Shankar for 33.

Rashid Khan struck a body blow by dismissing the dependable AB de Villiers caught at extra cover by Warner for 1.

Washington Sundar and Dan Christian failed to contribute with the bat as RCB stumbled to 109 for 6. Maxwell’s entertaining 59 helped RCB reach a competitive score of 149/8 after 20 overs.

Jason Holder was the pick of the bowlers for Sunrisers with figures of 3/30, while Rashid Khan ended up with 2 wickets.

Chasing 150, Hyderabad lost Wriddhiman Saha cheaply for 1 in the third over. The pair of David Warner and Manish Pandey steadied the ship with a 83 run stand for the second wicket before the former mistimed a Kyle Jaimeson delivery to Dan Christian long on for a well made 54.

Shahbaz Ahmed claimed the wickets of Jonny Bairstow, Manish Pandey and Abdul Samad in the 17th over to turn the match in favour of RCB. Rashid Khan provided some hope for the SRH by smashing 17 off nine balls before being run out while going for a non existent second run. Sunrisers eventually ended up with 143/9 giving RCB a six run win.

Glenn Maxwell was declared the Man of the Match.