Chris Gayle and Mandeep Singh scored respective half centuries, as Kings XI Punjab registered a comfortable 8 wicket win over the Kolkata Knight Riders at the Sharjah Cricket Stadium on Monday.

After being asked to bat first by KXIP, KKKR started disastrously as they lost Nitish Rana on the second ball of the innings to Glenn Maxwell for a duck.

Mohammed Shami then got into the act as he dismissed both Rahul Tripathi (7) and Dinesh Karthik (0) in his first over to leave them reeling at 10/3.

The pair of Shubman Gill and skipper Eoin Morgan counterattacked and swung the momentum back in the the Knight Riders’ favour by adding 81 runs for the fourth wicket, before the latter was caught at boundary by Murugan Ashwin off Ravi Bishnoi for a well made 40.

Sunil Narine, Kamlesh Nagarkoti and Pat Cummins too fell cheaply, as the Knight Riders slumped to 114/7.

Lockie Ferguson provided some resistance with the bat for KKR, with the New Zealander scoring a 13-ball 24, as he helped the Knight Riders reach a respectable total of 149/9 at the end of 20 overs.

Mohammed Shami was the pick of the Kings XI Punjab bowlers with figures of 3/35, while leg-spinner Ravi Bishnoi and Chris Jordan claimed two wickets each.

Chasing 150, Punjab opening pair of Lokesh Rahul and Mandeep Singh added 47 for the opening wicket, before Rahul was trapped leg before wicket to Varun Chakravarthy for 28.

Chris Gayle lit up Sharjah once again, by smashing 5 sixes and 2 fours in his 29 ball-51.

The West Indian left hander was an able foil for Mandeep Singh who registered his maiden fifty at the other end. Gayle was dismissed with just two runs to get, but Mandeep and Nicholas Pooran duly took KXIP past the finishing line. 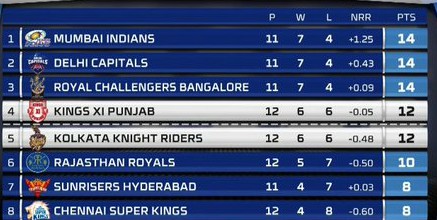 The 41 year old Jamaican left hander was declared the Man of the Match.