Shubman Gill and Virat Kohli both scored dazzling centuries as India thumped Sri Lanka by 317 runs in the third and final one day international at Thiruvananthapuram on Sunday to complete a 3-0 sweep of their Asian rivals.

After winning the toss and choosing to bat first, openers Rohit Sharma and Gill got India off to a fantastic start. The pair added 95 runs for the opening wicket before Rohit pulled a delivery from Chamika Karunaratne to Nuwanidu Fernando at deep backward square leg for 42.

The 23 year old Gill along with Kohli added 131 runs for the second wicket before the former (116) was bowled by Kasun Rajitha while attempting a big hit.

Virat got a reprieve on 82, when Vandersay misjudged a catch on the boundary . The 34-year-old made most of the opportunity and reached his 46th ODI hundred off just 85 balls. 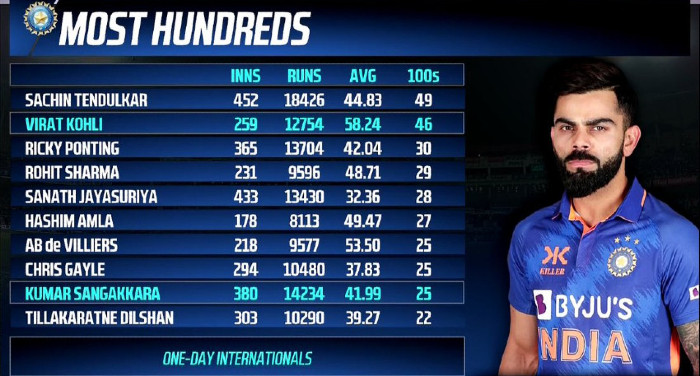 The likes of Shreyas Iyer (38), KL Rahul (7) and Suryakumar Yadav (4) fell in the quest for quick runs. However Kohli scored a magnificent unbeaten 110-ball 166 to take the hosts to an imposing total of 390/5 in their 50 overs.

Chasing 391, Mohammed Siraj wrecked the Lankan top and middle order by claiming the wickets of Avishka Fernando (1), Kusal Mendis (4), Nuwanidu(19) and Wanindu Hasaranga (1) to leave their side in tatters at 37/5.

Kuldeep Yadav then got into the act by cleaning up skipper Dasun Shanaka with a peach off a delivery that spun back sharply for 11.

The wickets continued to tumble as Dunith Wellalage (3), who had come in as a concussion substitute for Jeffrery Vandersay, chipped a simple catch to Surya at point off Mohammed Shami.

Kuldeep then wrapped the innings by dismissing Lahiru Kumara (9), as the visitors were bundled out for 73 in just 22 overs. Ashen Bandara who had a collision with Vandersay did not come to bat.

Siraj was the pick of the bowlers for India with figures of 4/32, while Shami and Kuldeep claimed 2 wickets each.

With this victory the hosts registered the biggest ever win (317) in ODI cricket, going past New Zealand’s 290-run win over Ireland in Aberdeen in July 2008.