Shimrom Hetmyer’s sparkling unbeaten 53 off 25 balls went in vain, as Delhi Capitals went down to Royal Challengers Bangalore by one run in Ahmedabad on Tuesday. 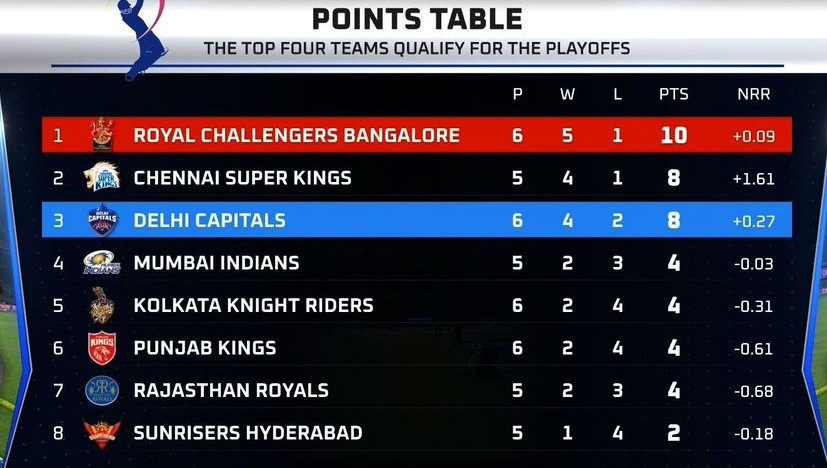 After being asked to bat first by DC skipper Rishabh Pant, RCB lost both openers cheaply. Skipper Virat Kohli chopped a Avesh Khan delivery on to his stumps for 12. Ishant Sharma playing his first match of the season, got through the defences of the in form Devdutt Padikkal.

Glenn Maxwell smashed two sixes and a boundary before falling to Amit Mishra caught at long on by Steve Smith for 25.

The pair of Rajat Patidar and Ab De Villiers stitched together a solid 54 run stand for the fourth wicket before the former pulled an Axar Patel delivery to long on for 31.

De Villiers took Marcus Stoinis to the cleaners in the final over, smashing him for 3 sixes as RCB finished on 171/5.

Mohammed Siraj dismissed Steve Smith caught behind the stumps for 4. Shaw nicked a wide delivery from Harshal Patel to wicket keeper for 21 leaving Delhi in a spot of bother at 47/3.

Rishabh Pant along with Stoinis put on 45 runs for the fourth wicket before the latter edged a Patel delivery behind the stumps.

Hetmyer was dropped by Padikkal on 15. With 46 requiring off 18 balls, the West Indies left hander smashed Jamieson for 21 runs in the 18th over.

The 24 year old left Guyana left hander reached his half century off just 23 balls. With 14 needed off the last over Mohammed Siraj held his nerve as DC fell agonisingly short by one run.

Harshal Patel was the pick of the bowlers with figures of 2/37. de Villiers was declared the Man of the Match for his sparkling knock.