England wrested back fourth spot from Pakistan after a fine all-round display saw them beat India by 31 runs at Edgbaston. Here are our talking points from this fixture.

India’s loss today at Edgbaston was their first of the tournament- it also means that every team at CWC 2019 has suffered at least one defeat.

England’s victory also paves the way for Australia to finish first- the defending champions will top the table if they beat South Africa in their final game.

India, for the first time in this tournament, also wore a special away kit today- will they wear it again if they meet England in the last four? 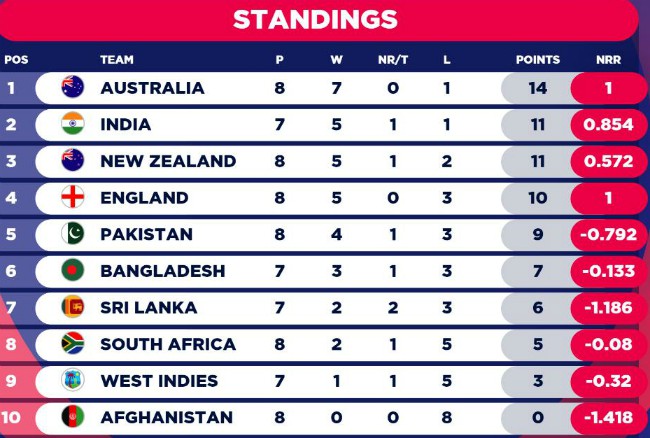 Jason Roy’s return a timely one for England

We had noted that England’s defeats against Sri Lanka and Australia came with Jason Roy missing. The Durban born opener was back in action today, and it also ensured a return to form for his partner Jonny Bairstow. The duo put on 160 runs in 22 overs, and that fine opening stand allowed England the luxury of a few quiet overs in the middle before they unleashed a final overs blitzkrieg.

Shikhar Dhawan is an absolutely fantastic player, more so in ICC tournaments, and today was more evidence that India will sorely miss him in the latter stages of the tournament. His replacement, KL Rahul, made a nine ball duck in India’s chase of 338.

With Dhawan missing, India also opted to give young Rishabh Pant, another southpaw, a go in the middle order. Pant was decent in his 29 ball 32, and may have just done enough to earn another crack at the position.

It’s hard to imagine that stat for Kohli, given his fine past conversion rate, but that’s exactly how things have panned out at this World Cup. Today the Indian skipper made 66 before slashing one to substitute James Vince.

Rohit Sharma made another 100, but couldn’t quite kick on, edging a Chris Woakes delivery to Jos Buttler as the required rate got higher.

England’s victory today, plus their higher numbers of wins, means that it’s curtains for Sri Lanka at the World Cup. Even if they win their other two games against West Indies and India, Sri Lanka can at best finish at 4 wins. Pakistan and Bangladesh still have a chance, but they’ll need to win their games and hope that New Zealand beat England in the latter’s final fixture.

Liam Plunkett makes a strong case to stay in the XI

England included Liam Plunkett at the expense of the out of form Moeen Ali. While it weakened their batting a bit, it did strengthen their bowling- Surrey star also picked up three absolutely vital wickets- Kohli, Pant and Hardik Pandya. Skipper Eoin Morgan has five out and out bowlers, with Ben Stokes also present as cover. It’s perhaps a combo England will persist with as they go further in the tournament.