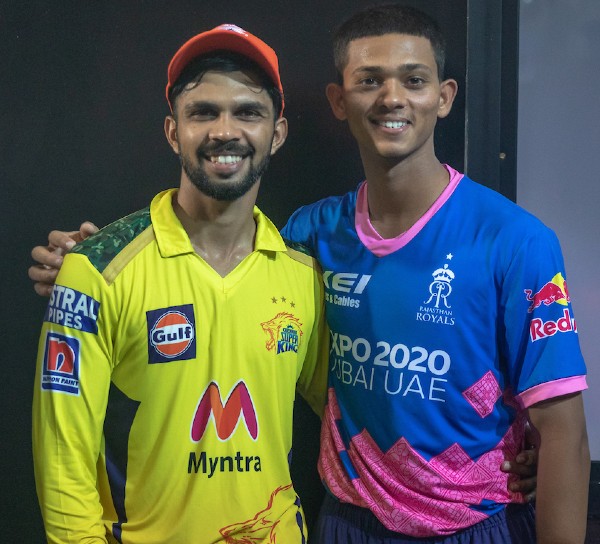 After being asked to bat first by RR skipper Sanju Samson, CSK opening duo of Gaikwad and Faf Du Plessis got their team off to a good start. The duo added 47 runs for the opening stand before Rahul Tewatia broke the partnership by dismissing Du Plessis stumped for 25.

Suresh Raina who walked in at No 3 perished quickly. He was caught at deep midwicket by Shivam Dube off Tewatia.

The pair of Gaikwad along with Moeen Ali put on 57 runs for the third wicket before the latter was stumped for a 17 ball-21.

The 24 year old Gaikwad along with Ravindra Jadeja stitched together an unbeaten 55 run stand for the fifth wicket to take CSK to 189/4 after 20 overs.

Ruturaj Gaikwad reached his century by smashing Mustafizur Rahman for a six off the final ball to remain unbeaten on 101.

Rahul Tewatia was Rajasthan Royals best bowler with figures of 3/39.

Chasing 190, Yashasvi Jaiswal and Evin Lewis got their team off to a sensational start. The pair added 77 runs for the opening stand before the latter fell to a Shardul Thakur short delivery to Josh Hazlewood at fine leg.

KM Asif then struck off his very first delivery by dismissing the dangerous Jaiswal as he gloved one to Dhoni for a sparkling 50. Her knock came off 21 balls with six fours and three sixes.

Shivam Dube playing his first game of this IPL season took on Super Kings bowlers by smashing them to all parts of the ground. He along with skipper Samson were involved in an 89 run stand for the third wicket before the latter was dismissed by Thakur for 28.

Debutant Glenn Phillips remained unbeaten on 11, as Royals coasted to an emphatic 7 wicket win. Dube was not out on 64 off 42 balls.