Shikhar Dhawan’s brilliant 98, followed by an impressive performance by debutants Krunal Pandya and Prasidh Krishna, helped India beat England by 66 runs in the first one day international at Pune on Tuesday. 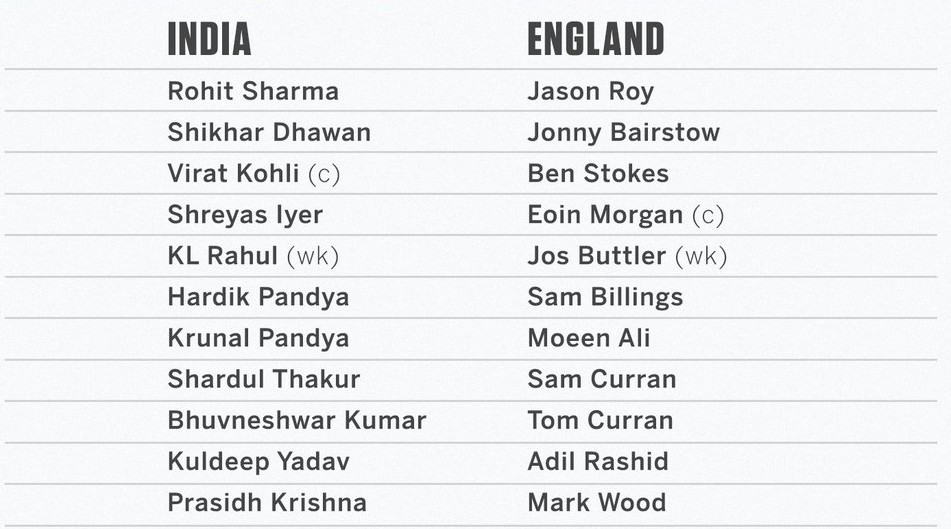 After being asked to bat first by England skipper Eoin Morgan, openers Rohit Sharma and Shikhar Dhawan made a solid beginning by putting on 64 runs for the opening wicket. The former however was dismissed for 28, edging a wide delivery from Ben Stokes to wicket keeper Jos Buttler.

Dhawan along with skipper Virat Kohli stitched together 105 runs for the second wicket, before the latter was caught at deep square leg by Moeen Ali off Mark Wood for 56.

The 35 year old Dhawan missed out on his 18th ODI ton by just two runs as he also fell to Stokes, pulling one straight to short mid-wicket.

Shreyas Iyer and Hardik Pandya both departed cheaply leaving the hosts in a spot of bother at 205/5.

KL Rahul, who struggled in the T20’s, however appeared to get his mojo back with a change in formats and ODI debutant Krunal Pandya also shone with the bat as the home side added 112 runs in the final 10 overs. The hosts ended up with 317/5 after 50 overs.

Stokes was the pick of the bowlers with figures with 3/34.

Chasing 318, England openers Jason Roy and Jonny Bairstow got their team off to a blistering start by putting on 135 runs for the first wicket before debutant Prasidh Krishna dismissed Roy for 46.

In his next over, Krishna claimed the wicket of Ben Stokes caught by substitute Shubman Gill at extra cover.

Bairstow along with skipper Morgan added 32 runs for the third wicket, before the former was dismissed by Shardul Thakur for an entertaining 94 off 66 balls.

Thakur then struck twice- first by dismissing Morgan caught behind by wicket keeper, and then having Jos Buttler leg before wicket to reduce the visitors to 176/5.

The pair of Sam Billings and Moeen Ali brought the innings back on track with 41 run stand for the sixth wicket, before the former was caught at short cover by Kohli for 18.

Moeen Ali looked good for a brief while, before he edged a Bhuvneshwar Kumar delivery to Rahul for 30.

Krunal Pandya claimed his maiden wicket by dismissing Sam Curran caught at long off by Gill.

Sam’s elder brother Tom Curran was the last batsman to fall, as England were bowled out for 251.

Prasidh Krishna finished with 4/54- the best by an Indian bowler on debut in ODIs. 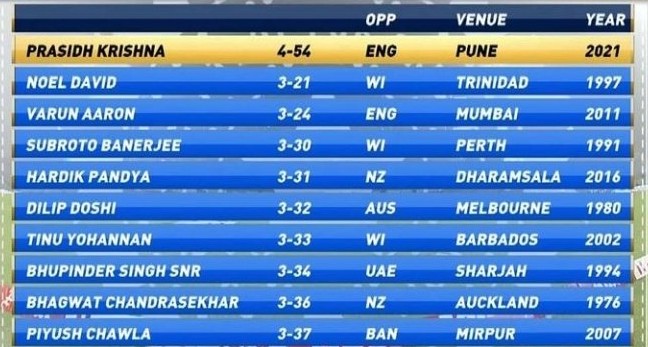 Shardul Thakur ended up with figures of 3/37, while Bhuvneshwar Kumar claimed 2 wickets.

Shikhar Dhawan was declared the Man of the Match.